I want to be vulnerable

So, day three of the bible study / devotional. It talks about the point in Genesis where Adam and Eve were told by God about the tree of the Knowledge of Good and Evil. It was talking about how it wasn’t an opportunity for God to see if His creation would screw up, it was an opportunity for them to draw in closer and to see if they would just simply trust. There’s that word again “simple”.

If you ask just about anyone these days if it’s simple to just trust anyone, you would get a resounding NO. There are days where I even struggle with it. It boils down to the times we have let our guard down and trusted someone, and got burnt. Sometimes it’s like match burnt and sometimes it’s like full-body sunburn burnt. Either way it tends to slowly cause a wall to be built to where new people have to go through the ranks in order to be allowed on the same side of the wall as us.

The problem is that we also tend to build up a wall against God as well. We act like He’s human and that He is going to hurt us. I can tell you from experience that God is not hurtful. He is not out to get your trust and then demolish you. He simply (yes there it is again) wants to love you, and to show you how life with full reliance on Him is the best thing for you.

I know there’s the “then why did so-and-so die, and why are there starving children??” There are usually back stories and consequences from past generations that cause things like that to happen. As far as death goes, there’s a one out of one chance you will die too, at least physically here on Earth. Every person has their time. God assigns that time and while we are here we have choices to make that effect where we go in the end. We have free will to choose God or choose Hell. That’s the black and white version of it.

What I want to do is like the title says, be vulnerable to God, let Him have my trust, and the control on my life. It’s not an easy thing to do. I’m a control freak and I have come by it naturally, but in order to have a rewarding life here, I have to let God have it and just hang on for the ride. He will put me where I need to be, because He sees the whole picture of my life and what He needs me to be doing, from season to season, till the day He takes me home with Him. You should try to do the same.  Oh and try chicken and waffles, it’s pretty good.

I have started a reading plan on YouVersion bible app by Jefferson Bethke. I thought it would be a good topic to talk about plus it will help me to comprehend and remember what I have read. The first two days have been talking about how this life, and this time on the Earth (even back to Adam and Eve) is part of God’s story. Each person that He created has a small part of the larger story.

I know God has shown me over the past 36 years of my life that He has me here for a reason, and basically put, it’s to show others His love.

The second day of the study is talking about how Christ is our tabernacle that came to Earth. God always wanted to just dwell among us, side by side, which is why He came in the garden, and why He had the tabernacle and the temple built. He wanted to be near us, His creation. He sent Christ to come, and now the Holy Spirit resides and dwells within those who have asked Christ into their lives. I love the simplicity of the Gospel. We have a tendency to make it so much harder than it really is. Christ came to save us, so we can spend eternity with Him. He just asks that in return we share that news with everyone. Which brings me back to my first point. Our story, my story, and why we are here.

There are obviously specifics as to what exactly I should do with the people around me that I influence but it still remains the simplicity of the good news of the Gospel of Christ.

He came, He loved, He healed, He prayed, He sacrificed. Now it’s your turn (and mine) to do the same.

There are way too many bumps in the road to try to keep up with my blog, but it’s now February of 2016 and my goal for this year is to be organized enough to do the things that I’ve been wanting to do. This includes writing and even recording some posts on here. What do I mean by recording? It could be a couple different things. I’ve now purchased a GoPro Hero 4, which means I can record some of my rants, post them to YouTube and then embed them here. It could also mean podcasts coming. That way I don’t have to worry about video editing, just audio! This post is going to be the start of this. Yes, I have redownloaded the WordPress app to my phone so that I can do this.

A new “what’s going on with me” update will be next. I just wanted to put this first.

You would think that being that I have my phone on me pretty much at all times that I would update my blog more often.. But as always, I’ll forget to do it once, then it just snowballs till it’s months later.

I miss doing the interviews but that might be part of why I don’t blog, who knows. Since the last time I wrote, I’ve helped get a ministry started. It’s called the Battleground. We host bands and have teens come in to hear the music and the Word. It’s come together quite well. God has put many pieces together to help us to have an amazing ministry in just a few months. Of course the devil is trying to get his hands all over it in any way he can.. He’s such a punk. We continue to press on and make the best of it and keep our armor on and ready for battle.

I’ll try to keep this going this time, it’s not like it’s difficult. I’m paying for this, might as well use it. Haha.

Suit up.. The battle is ON!

Oh how I love laundry..

Ok. So the title makes it seem like I do all the laundry in the house. Truth be told.. Nope I don’t (I know..big surprise) but what I hate is that somehow our dryer doesn’t work. It worked just fine before we moved. But now.. No dice. The landlord put in a plug for 240 (ie old 220) and we’ve got juice to the back of the dryer, but it won’t turn on. I drives me crazy. Not as much as my wife who has been hanging almost all the clothes up around the house. With three kids and cloth diapers, it’s an every day job.

My wife called an appliance repair man that’s like a block away but he doesn’t make house calls…which makes no sense. I would have to borrow a truck and get help to take it down from our upstairs apartment and then pay him 25 bucks to look at it..then buy a part and try to fix it, or pay him to.. Wait…hahahahahaha NO. So right now this all puts me sitting at the laundromat drying towels cause that’s the one thing of laundry that we can’t have crusty and crispy. Fun fun stuff. Oh and you only get 5 minutes per quarter in the dryers. And you can’t just put more than one in at a time. You still only get your five minutes. Ok so nothing about Jesus in this…well I went to church today..and I can’t think of how to tie this rant into something about Jesus. Sorry. I’ll writ another blog about what’s going on while I wait for this all to dry. 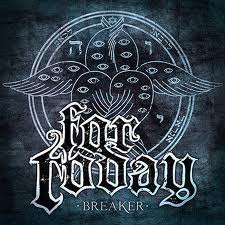 So I keep forgetting to post about a band that I’ve known about for a little while, but have never bought their album..TILL NOW. I’m so sorry that I waited. They have their newest album out called Breaker released on Facedown Records. Here’s the album cover:

You’ll have to really check it out for yourself, but you can see and feel the true Spirit of God just surrounding this album. The lyrics encourage us as Christians to stand up and fight for what we believe in. To show that we have been fully equipped by our Father and Savior Jesus Christ to battle, not against flesh, but against principalities and powers of the spiritual realm. Simply put..to put our foot up Satan’s rear-end so far that he’s chewing on our shoe laces. Here’s some of the lyrics to one of my favorites, Devastator:

Hell, fear me. I am the one that will bring you down. And when you fall, feel me. You’ll see my face on
the battleground.

Justice! God, bring justice! Justice! We will come against the bondage of hell. Justice! And we will take
back what’s taken from us. Justice! This is our right as heirs to dominion.

This war will end.

The entire album is just a phenomenal masterpiece (in my mind) and shows that it is still possible to speak Christ, pure and unedited, yes maybe in a growling voice, but still very straight-forward. I just hope that this type of sound can spread, like a virus, to not just the hardcore music industry, but to all Christians of all ages, sizes, generations. I get tired of hearing about “well that’s just THEIR generation”. I’ve even said that at times. We’re all CHRISTIANS. Let’s BE the church. So I’ve got a lebret piercing and 2ga. earrings in my ears and a few tattoos..does that make me less of a Christian than the 3-piece-suiters with the prim and proper hair cut? NO..but does it make me BETTER than them, because I’m different and they can’t “accept” me? NOPE. We all have differences, and we all have our ways to worship, but as long as we worship JESUS CHRIST and follow His Holy Word, then I don’t care.

My whole point with this is that yes the music may be aggressive, loud, fast and crazy, but it’s also very powerful and speaks volumes. We are to let others know that Satan is out there to seek, kill, and destroy our lives, our families, everything. If we FIRST submit ourselves to God, then we can resist the Devil and he will flee! We need to take back what God has blessed us with. Including His love, His grace, His mercy. Be reminded of that right now where you’re sitting reading this. God showed His mercy to us by giving us grace through love by sending His son Jesus, who died so that we can have eternal life. He just wants to help you. Let Him.